Joe played football and ran track at East Carteret High School where he held records in the high jump, shot put and discus. He was All-Conference and All-State in football. He played collegiate football at South Carolina State University where he was All-American and part of the South Carolina State Hall of Fame. Joe Montford is the only athlete in the history of Carteret County to have achieved most valuable player three times, league all-star five times, win professional league championships and to be selected to a professional sports league’s Hall of Fame, the Canadian Football League. Joe Montford was inducted into the Canadian Hall of Fame in 2011. 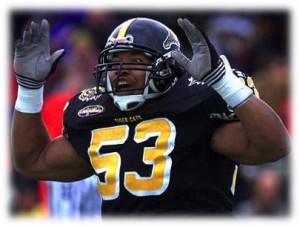 He was easily the best athlete I ever coached.  Along with that he was one of the best kids I ever coached.  His sports accomplishments are obviously impressive, however he was a better person.  I once switched him at East from a weight-lifting class to biology because he needed to strengthen his core subjects for college admission.  A few weeks later his biology teacher thank me for doing it.  She said he was a class leader and an exceptional student.