Jake Wade of Morehead City, nicknamed “Whistlin’ Jake,” pitched in the major leagues from 1936-1946.  At his death at age 93 in 2006 he was known as the oldest living member of the Chicago White Sox.  Alan Leary, once asked his uncle “Whistlin’ Jake Wade,” what was the secret to effective pitching and he said in his unassuming way,” Just throw the baseball so they cannot hit.” 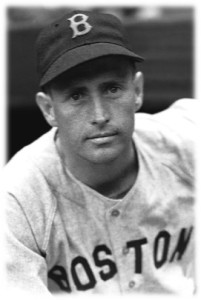 Jake Wade is not a celebrity; he doesn’t want any part of that … Everyday his mailbox holds a letter or a card from someone wanting his autograph or to ask him a question.

He told me of a man from California that came to Wildwood on a rainy Saturday night to get his autograph and the kids that send pictures for him to sign, but he’s not impressed.

‘The twenty years I spent on major league fields were good ones,’ he said, ‘but the years since I’ve come home have been good too.’

He is equally proud of his family and his grandson in Kuwait, his garden, the beautiful trees and flowers surrounding the home place – all of it together make Jake Wade.