Chip’s swimming career began in Carteret County where he trained both in the pool and along the beaches. He attended the University of North Carolina, where he swam for the Tar Heels swimming and diving team. During his freshman year, he set the Tar Heels team records in three events: the 500-, 1000- and 1650-yard freestyle. At the 2005 World Aquatics Championships, Peterson won goal in the 10 km event and a silver medal position behind German’s Thomas Lurz in the 5-kilometer event. Peterson was jointly awarded the inaugural Open Water Swimmer of the Year by “Swimming World” magazine with Lurz. His awards and medals continue worldwide including placing gold in the 2007 Pam American Games in Rio de Janeiro, Brazil. He was named the 2010 ACC Men’s Swimming & Diving Scholar Athlete. 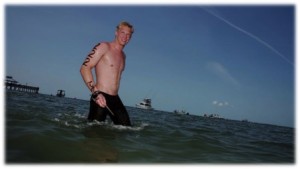 Peterson has scruffy white-blond hair, an easy smile and an amiable manner that has made him a favorite of his teammates. He’s also extremely tough … and he’s so smart!