Ben Wade of Morehead City pitched in the major leagues from 1948-1955 mostly with the Brooklyn Dodgers. In a 1950s World Series game between the Yankees and Dodgers Ben struck out the immortal Mickey Mantle. After his playing career, he became a prominent scout for the Los Angeles Dodgers and even served as director of scouting up to the 1980s. 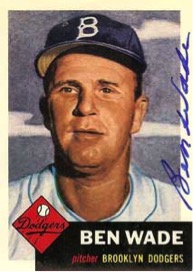 The Wade Brothers — Winfield, Jake and Ben — began their baseball careers in the sandy soil of Carteret County. As high school players they gain the skills that would allow them to quickly make their way to the top of their teams … In 1947, ‘about 800 people witnessed ceremonies when the ball park at Morehead City was dedicated to the three Wade brothers … The ball park will be known as Wade Brothers Memorial Park.”