Arnold Adams directed East Carteret High School’s Marching Mariners band from 1967 to 1996, taking them to great heights in those 30 years including Disney World, Washington DC, Rose Bowl Parade in California and the Macy’s Day Parade in New York. Starting with seven students taking band and an inherited record player, the East Carteret High School Marching Mariners grew to be a marching fleet of more than two hundred-fifty “going down the street.” 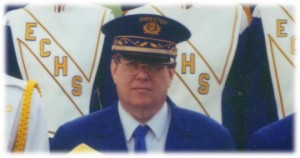 The previous director told me, ‘You’re not going to teach these kids anything. They don’t know what music is … They’re not smart enough to understand it.’

But I like big things … the program grew and grew. That room was made for 60 people and I put 250 in that little room. I had to go get my band parents and take out the risers so we could get all the kids in the band room. There was talent … It is unreal the talent in Carteret County in music!